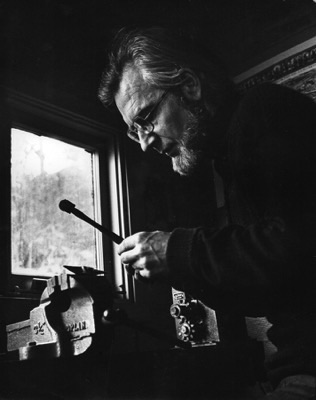 Artist and teacher Helge Esben Larsen died on 27 May, 2021. He leaves and immense legacy as an artist, jeweller, teacher, and mentor.

Following his migration to Australia in 1961 Helge formed a partnership with Darani Lewers, (Larsen & Lewers) in Sydney. During the 1960’s Larsen & Lewers pioneered the development of contemporary jewellery in Australia whilst also making hollow-ware and working on large scale commissions. Helge has been acknowledged as having introduced the tenets of Danish Design to the institutions in which he taught as well as facilitating reciprocal opportunities for cultural exchange between Australian and European jewellers. Over the 55 years of their partnership Larsen & Lewers broadened and consolidated their national and international reputation by maintaining an exhibiting profile throughout Australia and Europe.

Helge at work in the studio at Seaforth 1970s

Cick here for photos and video of the event